April 28, 2020
My radiation experience was, at first, easier than the chemo.  I had both external and internal radiation. I did the external radiation 5 days a week. The first week  Dr. Wagner had me set up where I was laying on my back with molds of my legs in a certain position so I wouldn't move while the machine went around me. While I had this done, I had to have a full bladder and I also had to pull down my pants and put a sheet over my pelvis so the machine could get a better shot at locating the tumor.  I also had three very small tattoos that helped the machine line up to where they needed it to be. The tattoos are just tiny dots and I got them the day I had the simulation.

I didn't stay on my back for very long. Dr. Wagner decided to have me move on my belly because he was worried that laying on my back with the machine for too long would eventually burn a whole through my vaginal wall into my colon and that would not be good. If that were to happen, I would probably end up with a ostomy bag. So he had me move to my belly to get a better shot at just hitting the tumor. This was difficult for me because for one, I had to have a full bladder and the pad I laid on had open squares and where I laid put pressure on my bladder. I also was dealing with nausea and heartburn so that made it difficult.

I had complained the first time I did it and the radiation tech told me that there were 80 year old women that had breast cancer and had to lay in that position to receive their treatment. So I put it in my mind that if they can do it, then so can I. I never complained again after that. I just sucked it up and did it.

I had both chemo and radiation for 4 weeks before I had my first internal radiation. That was a totally different experience than the external radiation. My first brachytherapy was May 15.  For my first one, I would have to be put under anesthesia.  I also had a spinal epidural and had my legs numbed. The reason for this is because they had to insert a sleeve that would hold the rods when they would be inserted. The procedure went well. I think it took about an hour, and then I was wheeled over to the cancer center when I woke up so that I could get my radiation.

I got wheeled into the room that had a ct machine that helps the doctor pinpoint exactly where the tumor is and they come up with a plan to run the radiation.  The whole process takes a couple of hours. This went good as well. I pretty much was in and out of sleep waiting for it to be done.  When I was done getting the radiation, we still had to wait to go home because the anesthesiologist gave me too much of the numbing stuff and my legs were still numb.  I also got sick as soon as I sat up. My day started at 12 and we didn't get to go home until 6:30 that night.  It was quite the long day. But we finally got to go home.  I just rested when we got home all weekend.


Here is a picture of a radiation machine. Not the exact same one I had, but very similar. The machine takes about 10-15 Minutes and would go around me. 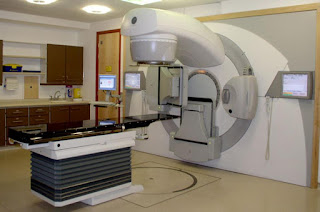